Concert Vs Tenor Ukulele: Which is the Best Uke for You?

Home / Guides / Concert Vs Tenor Ukulele: Which is the Best Uke for You?

When I was a kid, I always loved the idea of owning a ukulele to impress my friends.

I asked my mom to get me one but got nothing but rejection in return.

So, did I lose interest in that?

I got my first uke when I was 18 and it made me feel like the best person on earth. Yes, I was floating on cloud nine when I started playing it.

But the decision to get it wasn’t easy as I had set my sights on two types of ukuleles: concert and tenor.

Well, that’s what this comprehensive guide is all about—the difference between concert and tenor ukulele.

So, if you’re interested in purchasing one of these ukes, read on to figure out which uke is best for you and why.

If you look forward to making a well-versed decision for your next of the first ukulele, it’s better if you pay close attention to the breakdown. 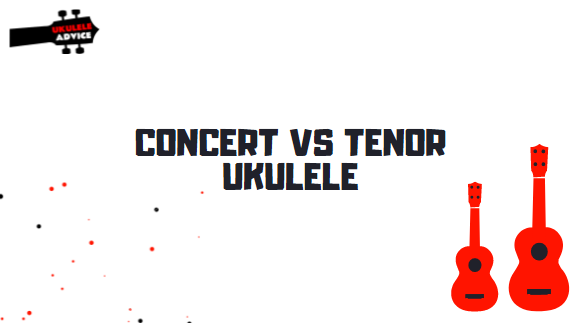 I’ll also discuss the strings, chords that both ukes make use of, and the tuning technique—if it differs or remains the same.

Concert Vs Tenor Ukulele: What are the Similarities?

Let’s talk about the resemblances first.

I know it is not the size nor is it the tone.

What is it then?

Well, both tenor and concert ukuleles are having the same notes. Not just that, they’re held and played in the same manner.

Now, some ukuleles might boast a low G while others may feature a high G. If the tuning depicts a small g (gCEA, for instance), then what you’re looking at is a uke with a low g tuning. On the other hand, a capital G refers to the lower-sounding G-string.

Therefore, it’s vital to pay close heed to the tuning while selecting the best ukulele for your music journey.

Due to such resemblances, some newbies may find it hard to distinguish between both: concert and tenor ukes.

Concert or Tenor Ukulele: What are the Differences?

Incomplete information of aforesaid ukes could make the beginners feel confused and the credit goes to the resemblances we’ve already talked about between the two.

But believe me, it doesn’t have to be that way—not as long as you’ve got access to this article.

So, let’s now shed light on the differences and give you the much-needed sight of which is the best uke for you.

If you’ve been playing ukulele for a long time, you could easily tell which one is a concert uke and which one is a tenor one by simply looking at them.

Having taken a close look, I’ve come to know that the tenor ukulele is 3 inches bigger than the concert ukulele.

So, from that, you could think of the average size of a concert uke as 58cm (equivalent to around 23 inches) and tenor as 66cm (equal to around 25-26 inches).

But remember, it’s just the average size I’m talking about. There could be some slight variations in the size.

Now since you’ve got the understanding of which uke is bigger and which one is smaller, the question is: is it good to go for a bigger one or smaller uke would be a perfect fit uke for beginners?

Well, let’s break that down, too.

It all comes down to the size of your hands, to be precise.

If you’re having larger hands, I believe that a large ukulele (tenor, in this case) would accommodate your hands well. A concert—on the contrary—is considered a great option for someone with small hands.

What if your hands are way too large?

Well, in that case, a baritone (the largest uke in the family) would be the right choice for you.

Note: some ukulists argue that accommodation doesn’t matter much for beginners.

Let’s get it straight—you don’t buy a uke every day, do you?

That’s why investing in a ukulele means you won’t be buying another uke for several years.

That’s why the next thing that could either make or break your music career is the sound or tone of your uke. Hence, making sure that the uke features good sound production is important.

You may not believe but the tones or the sound has everything to do with the size of the uke. The difference in size will result in different sounds and tones.

The rule of thumb says a tenor uke is the best choice if you after more rich, fuller, and warm sound. Due to being bigger in size, a tenor ukulele also produces loud and bass-rich sound.

However, if you’re a fan of bright and sparkly tones, then definitely a concert uke is the front-runner in that area.

While the tone of a uke gets affected by the size, it may not be the only factor. Yes, there are other factors that determine the tones, such as the tonewood, type of material used in the making, type of wood, quality of strings used, etc.

If you have no idea about any of these factors, I strongly suggest you see my take on ‘How to choose a ukulele?” and get yourself the level-headedness you crave.

This is related to the size factor we’ve discussed already.

The bigger the scale length, the superior the uke will be in size.

Usually, a tenor features a 15-inch scale, whereas, a concert ukulele has a 17-inch scale.

As you can see, there’s a slight difference when it comes to the scale length of the concert and tenor ukulele.

If you have no idea about the measurement of the scale length, you can think of it as a distance from the nut to saddle on a uke.

Still not making any sense to you?

Refer to the length of strings that vibrate when you strum your uke.

Due to the size of the uke, the playability also gets affected. Put differently, a tenor uke could be a great choice for people having large hands while a concert uke is an ideal choice for players with small hands.

The fretboard (a.k.a. fingerboard) of your uke is vital, too, as its thickness, width, and length will highly likely affect the timber.

There are basically two types of fingerboards: rounder and flatter. Fretboards that are having a small radius are usually more curved than those with a larger radius (see how).

Want your ukulele to stand out? Perhaps, you should try scalloping the fingerboard.

Although you may think of tension as a completely different factor, it is not. That’s because the scale length directly impacts the tension on a ukulele.

It goes like this: the longer the length of the uke, the stronger the strings will feel. And since tenor ukes are bigger in size (or scale length), they tend to give you tighter tension than concert ukes.

Analysis shows that increase of tension in a tenor uke could range from 35% to 50%, as compared with a concert uke. While this may sound like a lot to you, especially the beginners, you won’t notice much difference while strumming on both ukes.

I know you’re on the lookout for an in-depth comparison between concert and tenor ukuleles, but I say don’t overthink the string tension because you’ll get along just fine with it.

But speaking of the next-up factor, you have got to be very careful of you’ll end up breaking the bank.

This is where things get confusing and beginners, most of the time, come unglued.

Well, it’s because both concert and tenor ukuleles are available at different pricing models, ranging from $30 to $500 or even more.

Now, a newbie doesn’t have any idea whether or invest in a 50-dollar ukulele or a $100 ukulele in spite of being sure about the type.

Although you can steal the deal for both ukes somewhere around $50, for a top-of-the-line model, the pricing model might go up and up (consider this one, for example, which comes as a kit—with all the accessories).

And if you’re after the answer, the truth is that tenor ukuleles are slightly more expensive than concert ukuleles because they are larger in size and, therefore, use more materials.

Another question we most get asked is: how much should a beginner spend when purchasing a ukulele for the first time?

Well, it depends on the budget, to be frank.

If you’re tight on budget and would like to purchase a ukulele based on the price only, then I believe a concert uke would be the right option. But you can’t miss out on the size and other benefits that come with it (as touched on above).

Therefore, think about every factor I’ve laid out above before making the final decision for your buy so you don’t hurt yourself financially and emotionally as they say you get emotionally attached to your uke when you spend your time with it.

Now when it comes to pricing, I would suggest you decide based on the price range; rather, you should consider other factors described above. It’s because there’s not much of a difference taking the pricing into consideration.

You’d basically see a difference of $10 to $20 in the pricing of tenor and concert ukuleles designed for entry-level ukulists a.k.a. beginners.

Time to wrap it up!

As you have seen apart from being different from other each other, concert and tenor ukulele have a lot in common.

So, which one should you go for?

In my opinion, the pricing doesn’t matter that much because you only purchase a ukulele for a long period of time—this is something you don’t every day. However, the size, tonewood, and quality of the uke are something you can’t miss out on.

I’ve also explained which uke will accommodate your hands better, which matters a lot. So, think about that.

If this your very first time playing a ukulele, I would say go for a concert ukulele because it’s pretty easy to hold, less expensive, and smaller in size (perfect for people with small hands). But if you have got way big hands, you don’t want to invest in a concert but a tenor uke would make your day.

So, that’s all I’ve got on “Concert Vs Tenor Ukulele” for today. If you have any questions or suggestions, feel free to drop a comment.

Don't miss out on the best Ukulele; rather, stay one step ahead and steal the deal. Also, keep in mind all the things we've mentioned above so you don't end up buying a piece of junk.